If I Had Only Known the Beauty of Ordinary

If I Had Only Known the Beauty of Ordinary 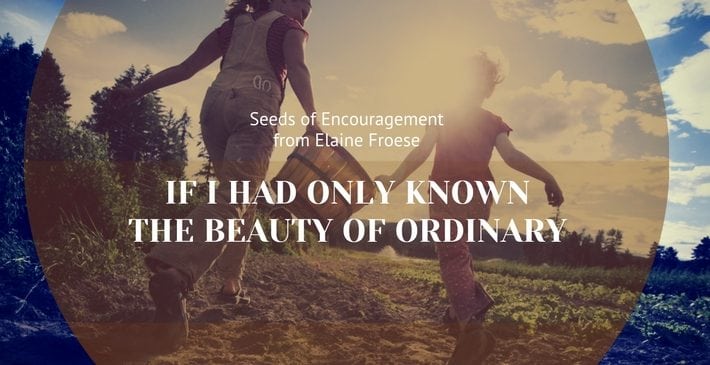 My digital photo stash needs organizing, but what about all those seemingly ordinary days on the farm or in town that you wish you would have captured, if you had known your life would drastically change one day?

Consider Chad Hymas’s story. Chad was crushed by a 2000-lb bale in an open tractor with faulty hydraulics that he had “just not gotten around to fixing.” He now impacts the lives of thousands, sharing the reality of his life as a C-4 quadriplegic. Chad’s strong farm hands have withered to curled thin tools. He showed us the only picture from his archives, a single photo of his strong hands in a family shot that reminds him how quickly things can change.

Just after hearing Chad’s story, I received sad news that a wonderful, talented man who had worked alongside us for only a year had just passed away from a second battle with cancer. This amazing, cheerful fellow had landed at our farm to fulfill a dream of working with big farm equipment, and we welcomed his talent to envision, create, and build things for the good of our operation. One of the first things I thought of was his family picture that graces the spot where he shared supper with us on a regular basis, and the harvest shots that are now priceless, as 2009 was his first and last harvest with us.

Why am I telling you these sad stories?

I want you to start appreciating the ordinary things of your day and your life that you are taking for granted, especially the people sharing your journey.

Try hanging out with farm families as they work to capture the cows, sit down at the farm kitchen table, and experience the feelings of pride in the farm folks whose weathered faces under ball caps and tanned bodies are working hard to provide great food for this world.

How many pictures are there of you tending the garden or the flower beds? Do you have a shot of your hubby in front of his favorite truck, or raking the lawn with his grandchild? The everyday things of life become highly charged when a loved one departs this world, and you realize that you never really captured his or her essence on film – be that in black and white, sepia tones, color photos, or on video.

[Tweet “#Farmers enjoy the beauty of #ordinary. Don’t let yourself say “if I had only known.””]

If I Had Only Known

Just after I learned the news of our employee’s death, I was sitting in the memorial as Jana Stanfield played her guitar and sang “If I had only known.”

Jan sings: “If I had only known it was our last walk in the rain, I’d keep you out for hours in the storm…I would hold your hand like a lifeline to my heart, and underneath the thunder, we’d be warm…if I had only known…”

How about setting aside one evening a week to archive the photos you have, make a collage, and take the snapshots that are missing from the extraordinary family you belong to, the family that just does ordinary things?

When someone dies without much time to say goodbye, there are often regrets or what I call “grief spasms” that remind us of our loss. If I had only known that my mom was going to have an asthma attack in the middle of harvest, I would have phoned her the night I thought deeply about her, after I had delivered the meals to the field. I thought of her while I was crossing the yard. The last time I heard my mom’s voice was a night when my house was full of Sunday guests, and she was looking for “Judy’s apple pie filling recipe.” If only I had known… our last conversation might have been different.

I have heard of widows who gently refuse to erase the voice mail of their spouse’s voices on the answering machine. How about doing some digital recording of the fun stories your kids, grandchildren, and other relatives would love to share? My husband Wes and I once listened to his mom’s story on a cassette tape while we were driving to his mom’s sister’s funeral. It was an amazing ride. Mom’s voice comforted us and helped us celebrate the aunt’s life. The aunt was a beloved sister who died just six short weeks after Mom.

If you had known that it was going to freeze last night, with a killing frost, you might have run out to the garden in your nightie to cover the tomatoes. Yes, I too am glad that the neighbors aren’t able to see my late night garden attire, but aren’t you thankful for another few weeks of delicious home-grown food?

If you had known that your friend was having her sixtieth birthday the night you invited her over for supper, you might have baked a cake. I discovered at the last minute that my friend was turning sixty the night she and her hubby shared our supper table. I am thankful that my stash in the gift drawer had something she liked.

I am also thankful that the flames of tissue paper that ignited when her gift wrapping touched the votive candle centerpiece only caused a small fire! If you had known that the fire would consume your belongings… you might have renewed or upgraded your household insurance.

Capturing the Essence of Ordinary

There are so many things that we need to manage in our households, but some of it is only stuff. People and the joyous memories of the richness of our relationships cannot be replaced by stuff.

Would you be willing to spend the price of four bags of seed canola on a photo book that captures the essence of your farm family on an “ordinary day?” I would.

I might rearrange the household finances to find a way to treasure the memories of fun in the barn, straw forts, spring rafting, chasing cows, or riding horses with “Pappy” or “Nanna.”

The night before my friend Karen’s father died, she felt led to take a photo of his hands. He had struggled for a decade with a chronic illness, yet never complained. He modeled gratitude and grace right to the end of his life. His name was Bob McRuer, and because of some of his visionary hard work and others, there is a Boundary Trails Hospital today between Winkler and Morden. That’s the same hospital that gave sanctuary to our employee before he passed.

What do you know in your heart that you need to do today so that tomorrow doesn’t catch you saying: “If I had only known?”