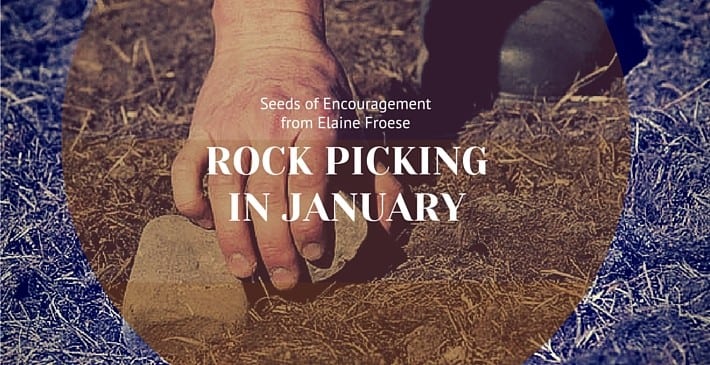 “Hey, watch out, there’s a rock the size of a loaf of bread about to go through the header!!” I yell to my new hubby in the cab of our combine as we harvest in l981.

“Don’t worry, I saw it, and there will be more.” he confides to me.

As a Red River valley farm girl transported to marriage in the Waskada Clay Loam of Southwestern Manitoba, I have developed the habit of picking stones or rocks on my field walks as I deliver meals, fuel, or help out with the harvest. I wasn’t used to picking rocks in my childhood near Dugald, because there weren’t any.

January is a great time for rock picking on your farms, but these rocks are not in your fields, they are in your heads. They are the priorities – what the late Stephen R. Covey, author of Seven Habits for Highly Effective People, calls the “big rocks.” They are the things you need to put into your jar of life first, in order to get them accomplished, then the pebbles, sand and other demands on your time will fill up your life’s time container. If you don’t put the big rocks in first, the daily interruptions, break-downs, and distractions (pebbles and sand) will pull you off the path you thought your farm and family were trekking down. Your time jar will be full, but you won’t be happy, because the big rocks did not get accomplished.

Recently in a farm family meeting with mom, dad, 4 adult children workers (the successors) and one spouse, we had an “ah ha” moment. The oldest worker and successor had ten years of working alongside Dad and Mom, and he was very confident in what he could accomplish in a day. His three siblings were struggling to catch up to the oldest sibling’s sense of confidence. One brave soul confronted Dad at the meeting with a plea to not be too eager to let go of leadership and management of the farm too quickly, but to have a mentorship and learning plan so that she could capture the skills and capacity to do awesome, efficient work in her roles on the farm. Each adult worker and successor was asking for better communication and clearer direction of the tasks and skills required for each day. Dad was coached to concentrate on having a mentor/leadership role to train the next generation fully before letting go of his “ultimate decision maker” role.

But how were they going to accomplish this on a practical basis?

I walked over to the large year calendar on the farm office wall. It was blank. The dates and months were there of course, but nothing was written on it. That is changing for 2016. Each month is going to be blocked with the tasks, jobs, and priorities, the BIG ROCKS that the team needs to address. The main manager, Dad, is going to document daily in his field notes on his phone what he is doing and what needs to be prepared for. It will become a living document of the jobs, priorities and timelines that need to be honoured for their specialized farm. The field notes are accessible on the main office computer for all workers to monitor.

[Tweet “Learn to better #manage tasks on the #farm and plan for a better #succession, when it’s time.”]

I have seen the same plea from another family where the office manager did not have a clear sense of the patterns of management for the seasons of the year. She just wanted Dad to write down the monthly priorities and goals, so that she could get a sense of what needed to be done, and what was a lesser demand on her time.

Michael Pantalon’s book, Instant Influence has 6 helpful questions in getting people to understand what is important to accomplish. He uses a range of one to ten, with ten being most important to help folks get a clear quantitative feedback.

For instance, on a scale of 1 to 10, how important is it that we get this job done this

week?  If the manager says 9, then you know what the big rock is for the week. If he says 2, then other jobs take higher priority. You could also use this ranking system for the agenda items proposed for your operational meetings.

Some women have the tendency to use “rapport” as the way they prefer to communicate which drives some men crazy according to Deborah Tannen who wrote, “You just don’t understand”. Men prefer to have a concise “report”, just the facts please. So, there needs to be some compromise in understanding different communication styles as folks talk about the priorities of the farm. Figure out if giving the tasks ands goals a number will help you decide the size of the rock that needs to be picked.

Where Time Is Spent

Another issue in priority setting is getting a clearer picture of where time is spent. My farm clients who love their smart phones are using a program called Exaktime.com to track the work hours and what duties are being accomplished. Again, this tool helps with reporting the facts, the jobs done, and how much time they took.

If the work ethic of two siblings is different, the time tracking program on their phones will account for the actual hours spent working. To be paid, they have to submit the Exaktime records. The time sheets for the entire work crew are available on the office computer and records of the jobs accomplished are shared at the weekly meetings.

Someone once said, “You can only change what you can measure.” Farm conflict about who is working harder and longer hours is not uncommon. Perhaps it is time to invest in a tool to track what is actually getting done, by whom. You can start to monitor who is a good rock picker and who is fooling around in the sand or throwing pebbles, but not making the “main thing the main thing” to quote Stephen Covey.

When I go for walks along the field roads, I also like to find flat rocks to make inspiration plaques for young girls I mentor. I can write words to encourage them, and the rocks are a reminder to them that I value their growth as young women. I won’t find too many of these treasures in January, so it takes planning to harvest the rocks I need in the right season. Remember, planning ahead is a good thing.  Block out the big rock activities on your yearly calendar. Think about using colour coding for each worker. Do whatever works for your style and system, but do it!

How do you effectively manage your time? Please share with me your best time management planning tool.