Too Frosted to Forgive? 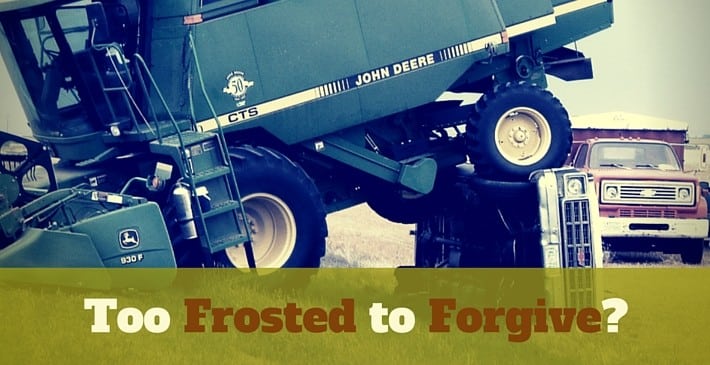 “Man, I can’t believe that guy, every time I make a mistake, he just can’t accept my apology, and he keeps really good track…for years!”

Does your farm team have the ability to apologize and accept mistakes?

I was saddened to hear a young farmer confide with me that in all his years, he has never once heard an apology from the farm manager, his father.

Many farm families are saddled with an invisible load on their backs. Everyday they carry the baggage of hurt, caused by a habitual pattern of family members who just can’t seem to let go of past offenses.

It is time for farm families to learn how to make “quick repair” as John Gottman calls it, and we are not talking about duct tape here! Forgiveness is one of the critical issues that farm families need to take a hard look at. Why do they avoid it?

Accepting the fact that you are hurt is one thing, but the tough part about forgiveness is that it is the offended (you) who has to seek the forgiveness of the offender (another family member). “Forgiveness is difficult because the person who is hurt does the forgiving and not the person being forgiven,” according to Anger is a Choice authors Time Lahaye and Bob Philips. (Zondervan, 2002)

We don’t forgive and forget. We remember, but we have a choice of what we do with the memories. LaHaye says, “I can let my memories lie and move on in my life, or I can let my memories over-power me. Forgiveness is letting go. It is the relaxation of your death grip on the pain you feel.”

Pain and the baggage of hurt from un-forgiveness may be keeping your farm team stuck. You might want to consider the art of surrender. Archibald Hart says, “Forgiveness is surrendering my right to hurt you back if you hurt me.”

You choose to forgive; it is an act of the will.

To be able to forgive, we have to look at the issue of hurt directly. The reasons for lack of reconciliation are many:

Choose to move to a better place: reconciliation and forgiveness.

Decide to “extend the olive branch” and make the first move. Seeking healing by asking for forgiveness is an act of the will, a choice.

Emotions may flow, but that is okay. Tears are not a sign of weakness; they are healing. If things get emotional, accept that. Your feelings are a normal part of the process. Don’t wait until you feel like it to offer an apology. Do you only go out to feed the cows when you feel like it? Deal with the manure in your life that is keeping you down!

Alexander Chase said, “To understand is to forgive…even oneself.”

All farmers, male and female, could benefit from great self awareness. We all make choices. A woman at a farm crisis meeting once said, “Mom always told me that I had a choice in how to respond to what happened to me in my life. I could get bitter, or get better!”

You might want to ask a third party, a minister or counselor or facilitator to help you do a forgiveness ritual. This session can become a marker of “starting over” or “cleaning up the mess” to create a new chapter for your farm team. You identify the key issues that are keeping the family business stuck. You talk about what I call the bull in the middle of the room, the Undiscussabulls.

Focus on forgiveness, making repair and crafting a new code of conduct which aligns with your family business values and cherished beliefs.

Healing is the goal that will move your family and business forward.

Forgiveness is one of those “soft issues” farm families get frustrated with when they are “too frosted to forgive.” Don’t wait or procrastinate. The time to act is now. There’s a multi-million dollar farm waiting to grow, and rich legacy of relationship that needs to be re-established.

Remember, it is your farm, your family and your choice. Make the choice today to mend the offenses and fences on your farm.